Russia is given a great honor to host 21th FIFA World Cup 2018 for the very first time. Besides Russia, Great Britain, Spain, Portugal and Belgium and the Netherlands made bids for holding the event.

Being the host of the first FIFA championship in Eastern Europe, Russia takes on the event organization with an awesome responsibility. The country prepares to the FIFA 2018 with vim and vigor to make the event unforgettable.

Swiftly developing Russian infrastructure is hastened by Winter Olympics 2014 in Sochi and FIFA World Cup 2018 and Summer Universiade in Kazan 2013.

11 the most magnificent cities will receive matches on their 12 stadiums: renovated or newly constructed, according to FIFA’s minimum requirement. The qualifying draw will take place in Saint Petersburg on either 24 or 25 July 2015.

The championship will be held from 8 June to 8 July. Territory of the event is divided into five districts: four clusters (Volzhsky, Central, South and North-Western) and Yekaterinburg. 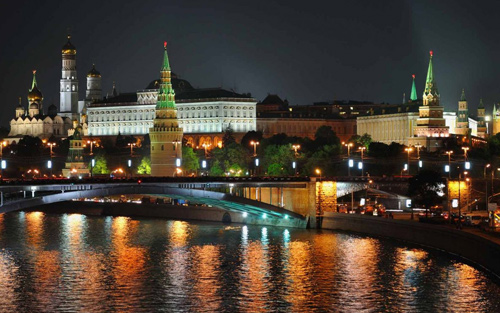 Founded in the 12th century, Moscow is the capital of the Russian Federation and one of the most renowned and fascinating cities in the world. It is a dynamic 21st century metropolis showcasing some of the world’s best shopping, nightlife, restaurants and culture. Moscow welcomes over four million tourists each year.

The city is blessed with beautiful architecture and such renowned cultural landmarks as the Bolshoi Theatre, the Kremlin, the Pushkin Fine Arts Museum and the Tretyakov Gallery, to name but a few. Moscow is also home to three UNESCO World Heritage sites, including the Kremlin and Red Square. The colorful St Basil’s Cathedral on Red Square is the symbol of both Moscow and Russia.

Luzhniki Stadium is located at the centre of Moscow’s 145-hectare Olympic complex, one of the largest sports complexes in the world. Luzhniki Stadium will be the main venue and the heart of the 2018 FIFA World Cup™ tournament, used for the Opening Match, a semi-final and the Final. The Luzhniki sports complex stretches along the Moscow River and lies opposite the beautiful Vorob’evy Hills Natural Park. The majestic Moscow State University observation area overlooks the stadium. 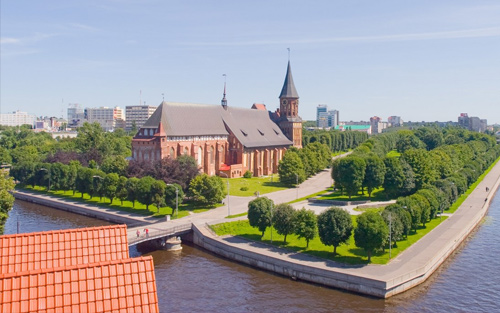 Founded in the 13th century by knights of the Teutonic Order and formerly known as Königsberg, the capital of East Prussia, Kaliningrad is home to over 450,000 people and an important Russian Baltic seaport and gateway to Europe.

Throughout its dramatic history, this ancient European city was home to a myriad of thinkers and artists including the philosopher Immanuel Kant, a life-long resident who taught at the local university; the iconic composer Richard Wagner and the romantic writer E.T.A. Hoffmann.

Kaliningrad’s pride is the reconstructed Königsberg Cathedral of the 14th century. The region has been known from classical antiquity as a main source of amber in Europe. Around 90 per cent of the world’s amber deposits are located here. The amber industry is still a key business in the city and attracts thousands of visitors every year.

The Kaliningrad region is blessed with pristine beaches and pine sand dunes. It features the beautiful nature reserve of Kurshskaya Spit, which was included in the UNESCO World Heritage List in 2000. 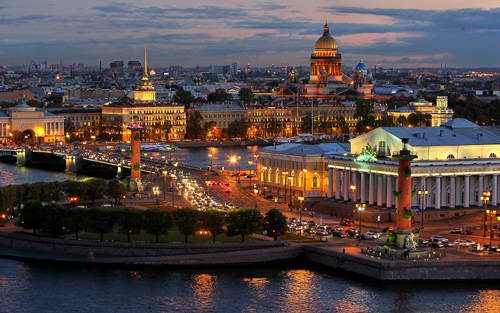 It is a federal city of Russia located on the Neva River at the head of the Gulf of Finland on the Baltic Sea. Saint Petersburg is a major trade gateway, financial and industrial centre of Russia specializing in oil and gas trade, shipbuilding yards, aerospace industry and many other businesses.

From architecture and city planning to the performing talents of the Mariinsky Opera and Ballet to the masterpieces of the magnificent Hermitage Museum, everything in this delightful city is focused on beauty and elegance. The city’s legendary drawbridges over the grand Neva River and the famous “White Nights” in June draw tens of thousands of tourists every year. Saint Petersburg city centre is a UNESCO World Heritage site.

Tourism is one of the key sectors of the city’s economy. Saint Petersburg welcomes up to five million tourists each year, more than any other city in Russia. 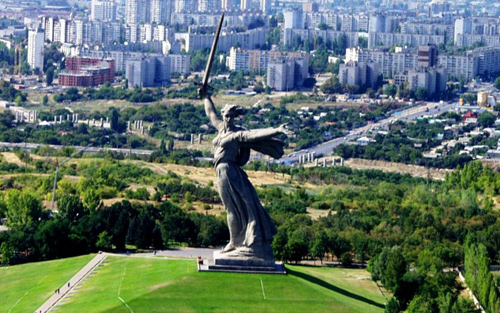 Volgograd and the surrounding area saw some of the heaviest battles during World War II. The Battle of Stalingrad was a turning point in the war. The 85-metre “Motherland calling” statue is Volgograd’s landmark and can be seen from any point of the city.

Volgograd is a centre for ecotourism in Russia. The city is close to the unique Volga-Akhtubin floodplains, the last pristine stretch of the Volga river valleys. Lakes make up 30 per cent of the park’s territory and count over 200 species of birds.

Volgograd is a true sporting city. Yelena Isynbayeva, a multiple world pole-vaulting champion and ambassador for Russia’s bid to host the 2018 FIFA World Cup™, began her sporting career in Volgograd. 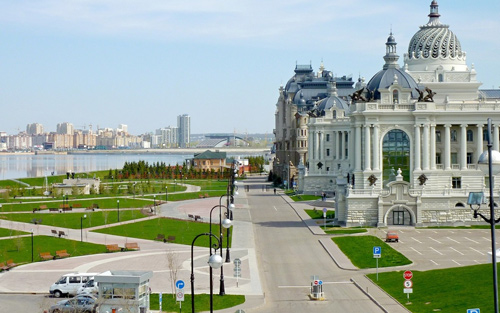 Kazan, one of the oldest Russian cities, celebrated its millennium in 2005. The ancient walls of Kazan recall many dramatic events, including the historic siege by Ivan the Terrible in the 16th century.

Modern Kazan is the capital of the Republic of Tatarstan and is home to 1.19 million residents. This timeless city is also a city of youth, home to 30 of Russia’s largest universities and more than 180,000 students. This “culture of youth” provides Kazan with a modern and progressive vibrancy, an energy that only young people can instil.

Visitors will also discover the ancient and fascinating Tatar culture in Kazan. A great centre of Muslim culture and a vivid example of how different ethnicities and religions can live peacefully together for many centuries.

The 16th century Kazan Kremlin is a UNESCO World Heritage site. Kazan is at the forefront of Russian sport, home to some of the best football, basketball and hockey teams in the country. 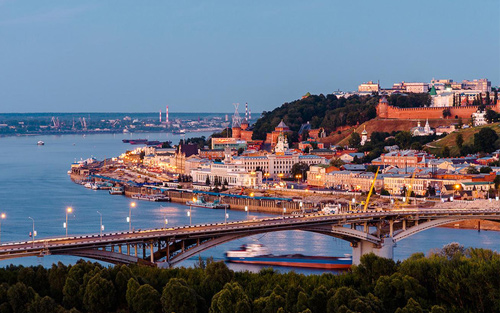 Due to its advantageous location on the Volga River, Nizhny Novgorod developed into Russia’s key commerce centre in the 19th century. It is one of Russia’s most traditional and beautiful cities. Famous annual trade fairs attracted the country’s merchants and wealth to the city.

Nizhny Novgorod, along with its Kremlin, is beautifully situated on the hills overlooking the Volga River.

The Kremlin, dating back to the 16th century, has a 2-kilometre brick fortress wall and 13 watchtowers. It stands on an elevation offering a breathtaking view of the city and its waterfront.

Nizhny Novgorod is one of a hundred world cities included on the UNESCO World Heritage List.

Samara is one of the most prominent Volga region cities and it is famous as Russia’s aerospace centre.

During World War II, Samara became a “second capital” of Russia as all government departments and diplomatic corps were evacuated there from Moscow. Places of interest for visitors include the massive 37-metre deep Stalin’s bunker and the beautiful nature preserve, Zhigulevskie Hills, on the Volga River.

Samara is an ideal city to enjoy the magnificent Volga River, the largest in Europe. The river is almost 2 kilometers wide here and has been a source of inspiration for poets and artists for centuries.

An iconic landmark of Samara is a 68-metre, 20-ton monument of the Soyuz carrier rocket, built to commemorate Gagarin’s space flight.

Samara is a major transport hub thanks to its international airport, major railway station and busy river port. 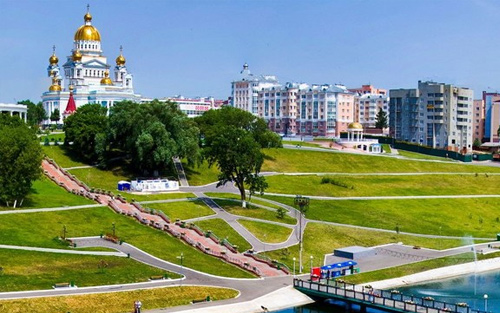 Located in central Russia, Saransk is the capital of the Republic of Mordovia and the area where all Finno-Ugric nations began. It is one of the most pleasant cities in Russia, regularly scoring high in the All-Russia city competition in recent years. This relatively small city is actively promoting sports and has commenced construction of a new, state-of-the-art 40,000- seat football stadium.

Modern Mordovia carefully protects the unique languages and cultures of the Moksha and Erzya ethnic groups, who inhabited the area for centuries. They belong to the Finno-Ugrian group, along with the Hungarians, Finns, Estonians and others. Saransk is a frequent venue for ethnographic and folklore festivals aimed at preserving national identity, culture and customs. 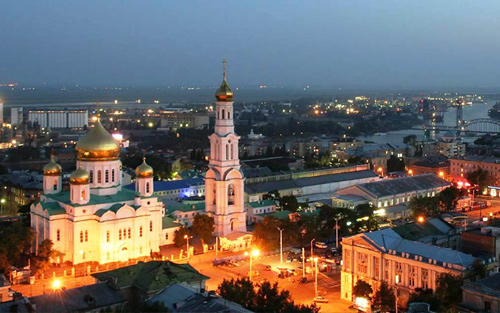 Known from the time of Herodotus as a land of warlike Scythians, the endless steppes of the Don River basin eventually became home to the freedom-loving Cossacks.

The flamboyant Cossack culture is still prevalent in Rostov-on-Don, a modern city of one million inhabitants overlooking the beautiful Don River. The village of “Starocherkasskaya”, located 27 kilometres from Rostov-on-Don, is the former capital of the Don Cossacks. Today it is a museum city and one of the area’s main tourist attractions.

Despite its profound history, Rostov-on-Don resembles a young and fresh city. The streets are romantically named Harmonious, Creative and Lucky streets. Here one can find the most unusual monuments: to a water pipe or to a newspaper reader.

River Don provides the city with the serene and picturesque sand beaches and unique cuisine, featuring fish and crayfish dishes. Rostov-on-Don is situated about 1,000 kilometres southeast of Moscow and is a key transport and cultural hub of southern Russia. 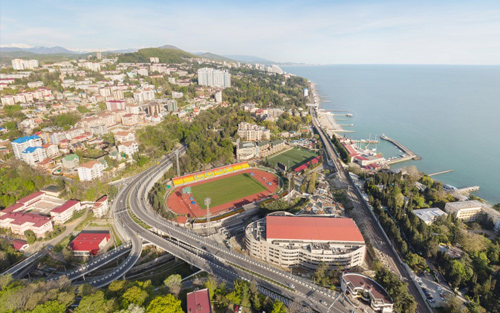 The Black Sea resort of Sochi has risen to global prominence after having been awarded the 2014 Olympic Winter Games. Situated along 140 km of the coast (the longest city in Europe) and against the backdrop of the Caucasus Mountains, this resort, now commonly referred to as the “Russian Riviera”, has long been one of Russia’s most popular tourist destinations and a truly great sports city.

The city offers countless opportunities for sports: mountain climbing, hang-gliding, diving, sailing, aqua bikes, skiing and much more. The famous mountain resort, Krasnaya Polyana, is located 40 km from the seacoast. In Sochi one can go skiing in the morning and sailing or swimming in the afternoon on the same day. The undisturbed forests surrounding the city are a UNESCO World Heritage site.

During the preparations for the 2014 Olympic Winter Games, Sochi’s tourism infrastructure underwent significant and extensive expansion and renovation. The resulting new accommodation and transport infrastructure provides a modern and tested state-of-the-art tourism environment for visitors attending 2018 FIFA World Cup™ matches in the city. 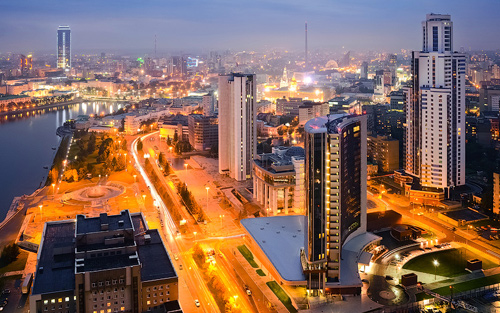 Uniquely located on the geographical borderline of Europe and Asia, and at the foot of the Ural Mountains, Ekaterinburg has a population of 1.37 million. The city was founded by a decree of Peter I the Great.

Ekaterinburg is the fourth largest city in Russia in terms of population, and is one of twelve Russian cities with a population of over a million.

During the 18th century, the city became known as Russia’s iron making centre, and it is now a modern city with world-class infrastructure that includes an efficient metro system and an excellent airport.

The city is also one of Russia’s most well-known centres for the arts and one of Russia’s leading sports centres. Ekaterinburg has the third largest number of diplomatic missions in the country (after Moscow and St Petersburg). 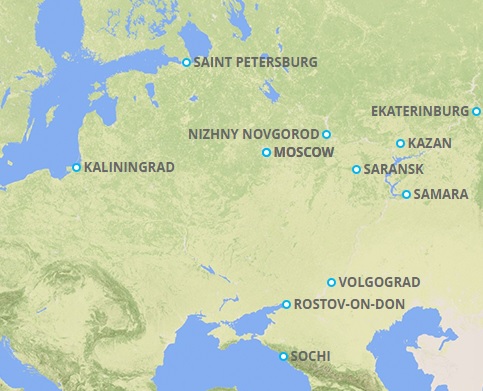